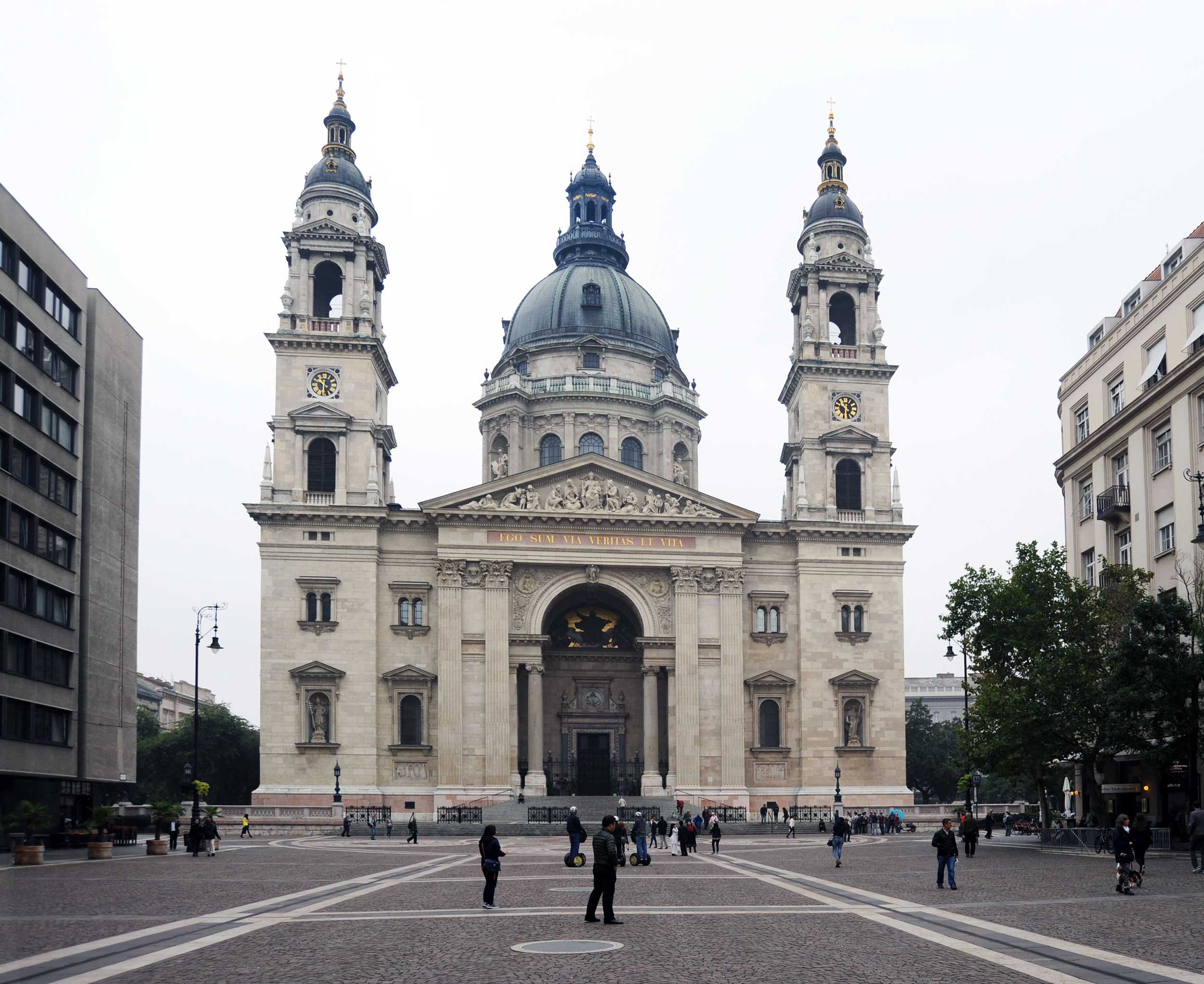 This massive building dominates everything around it. 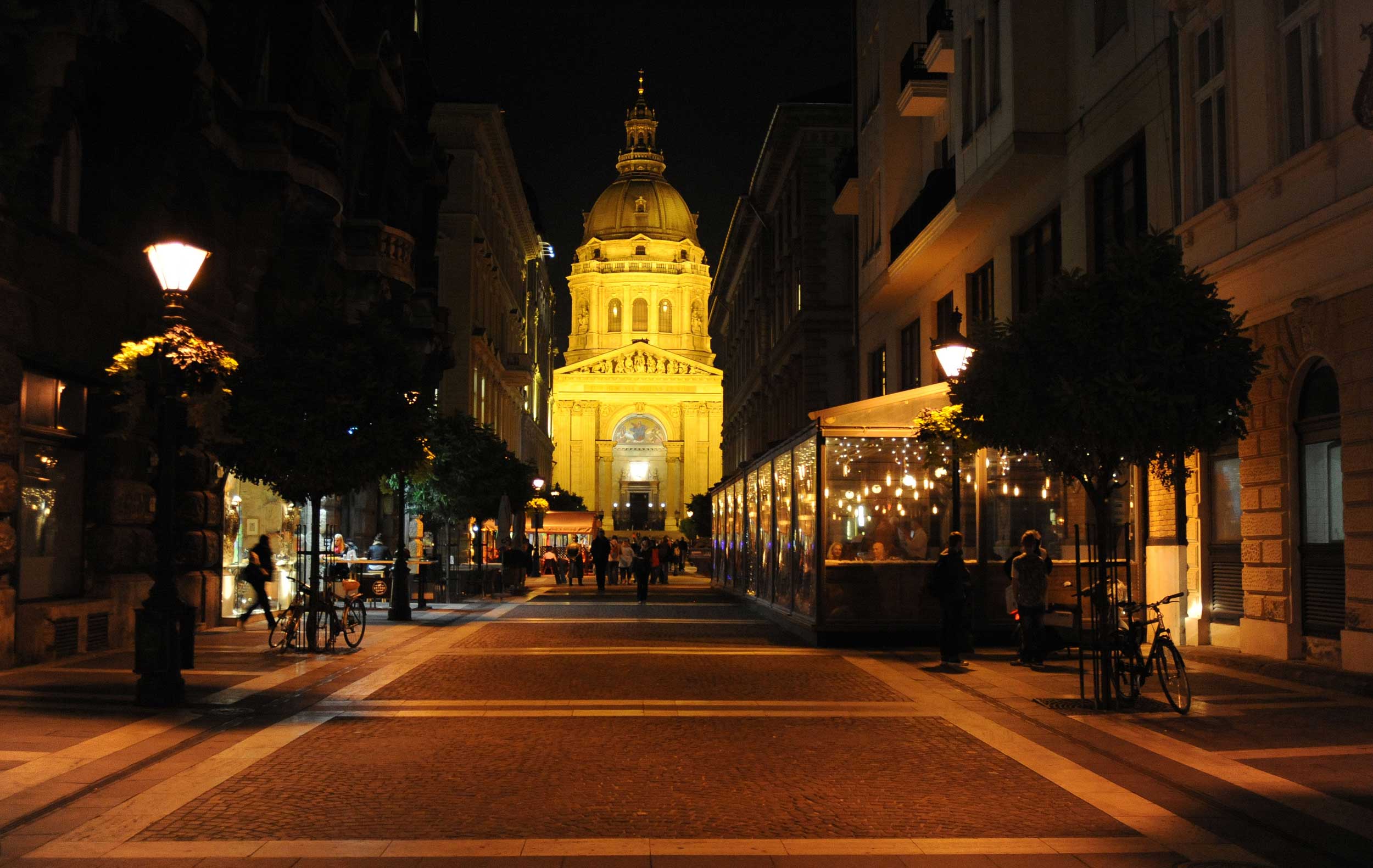 I prefer seeing it at night under the lights. The approach down this street is lined with excellent sidewalk restaurants and bars. 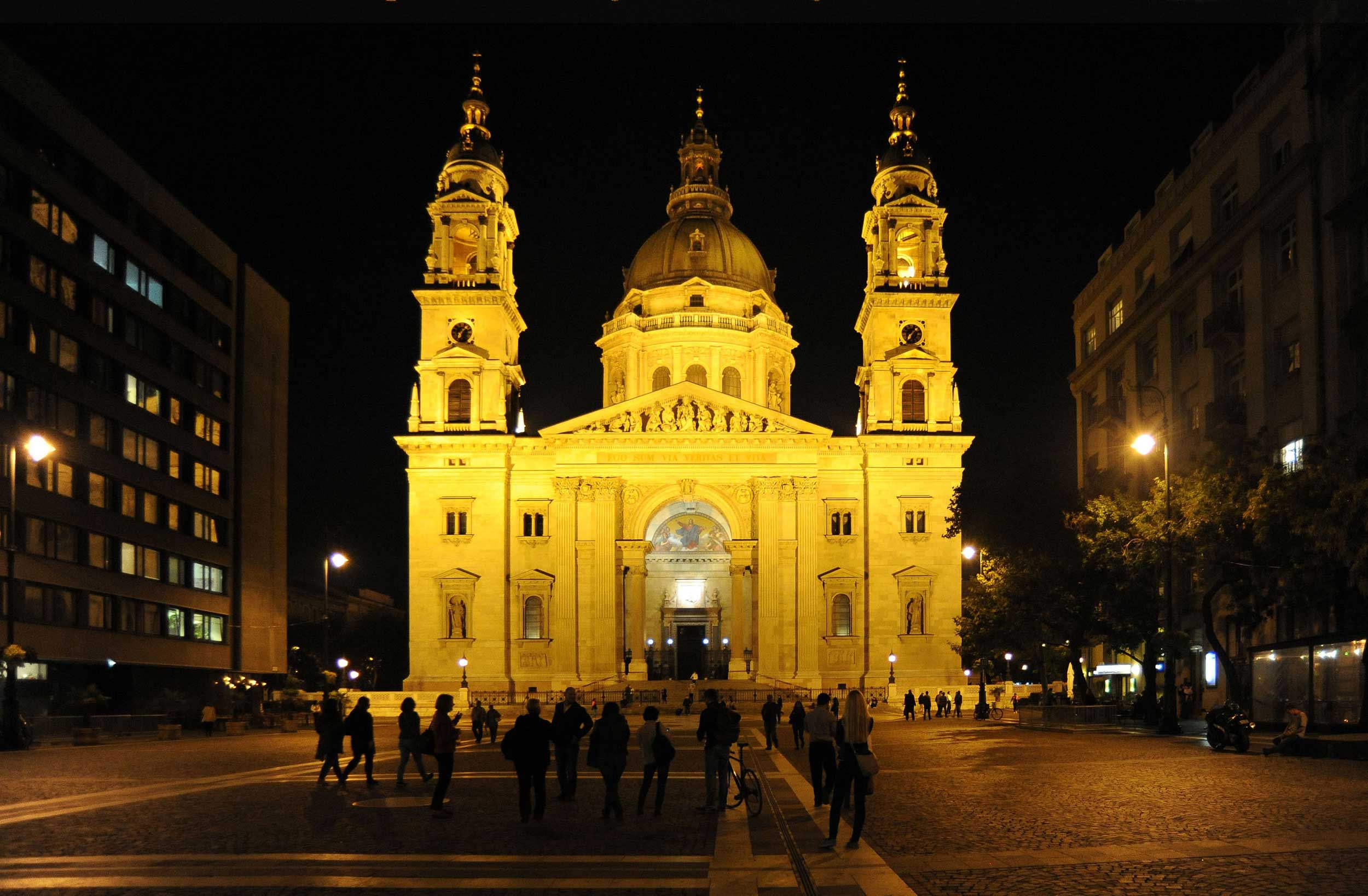 The interior is opulent. Red marble with white veins, and gold everywhere. 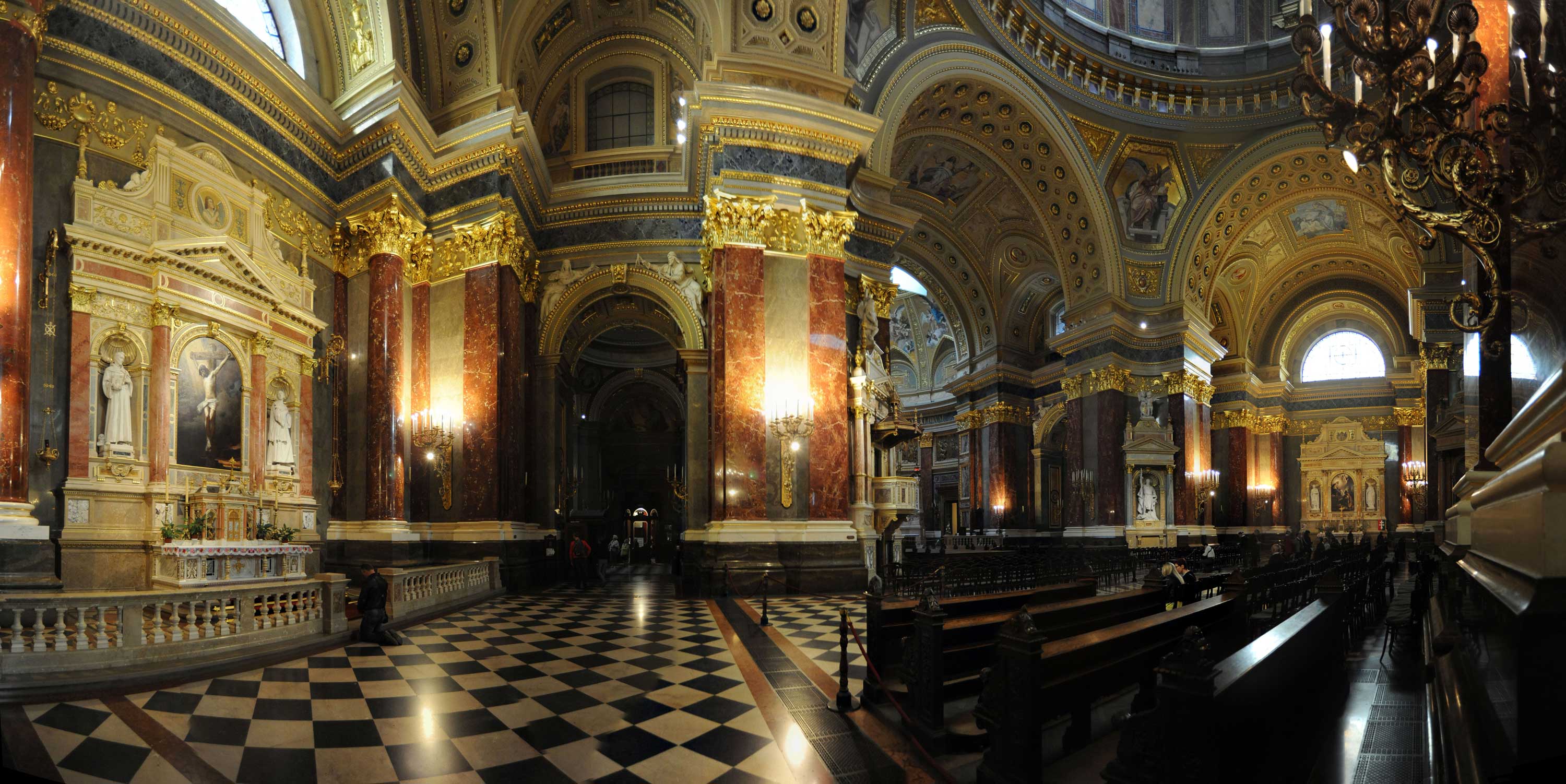 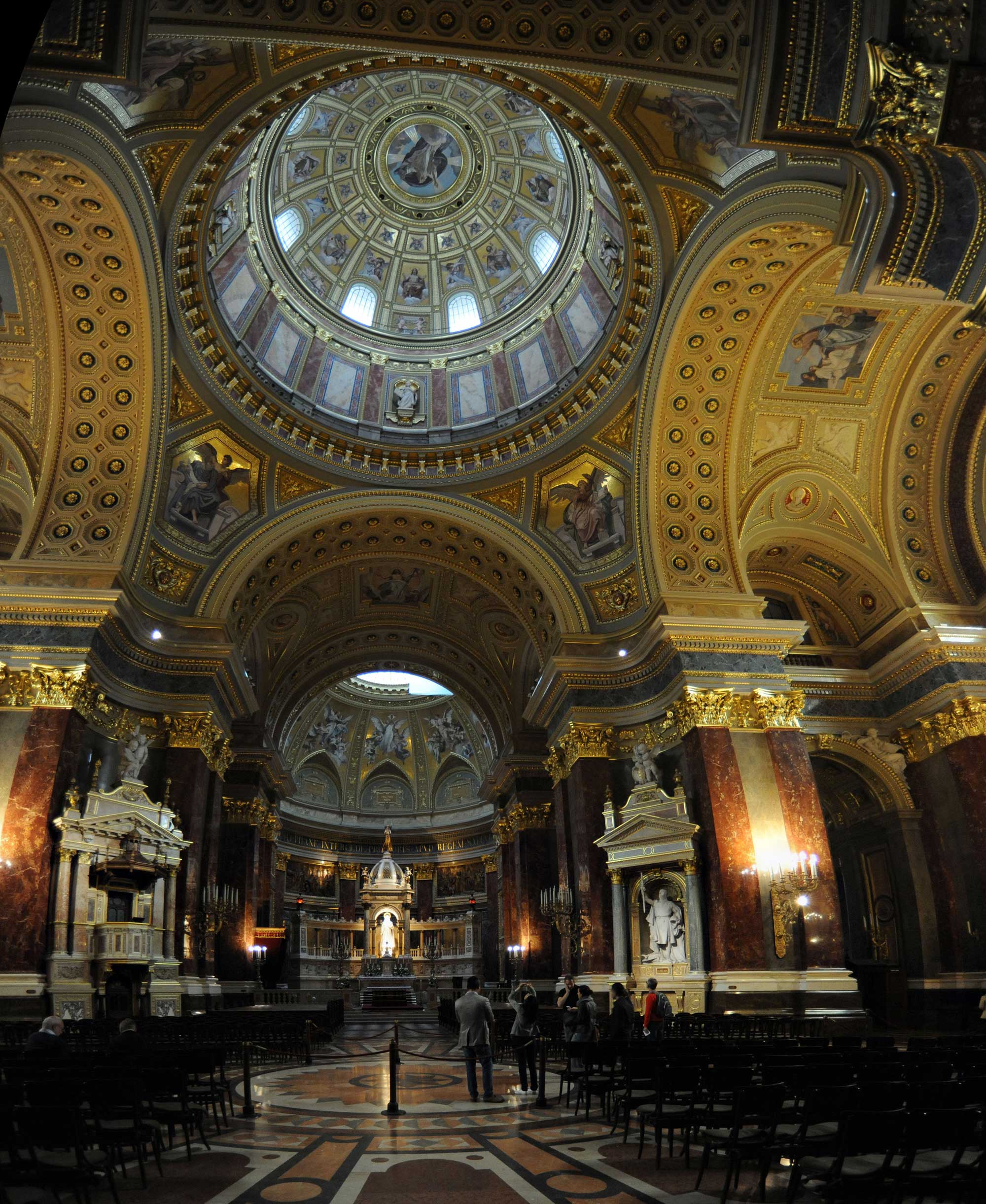 The chairs are set up for a concert that night. They will seat about five hundred attendees. 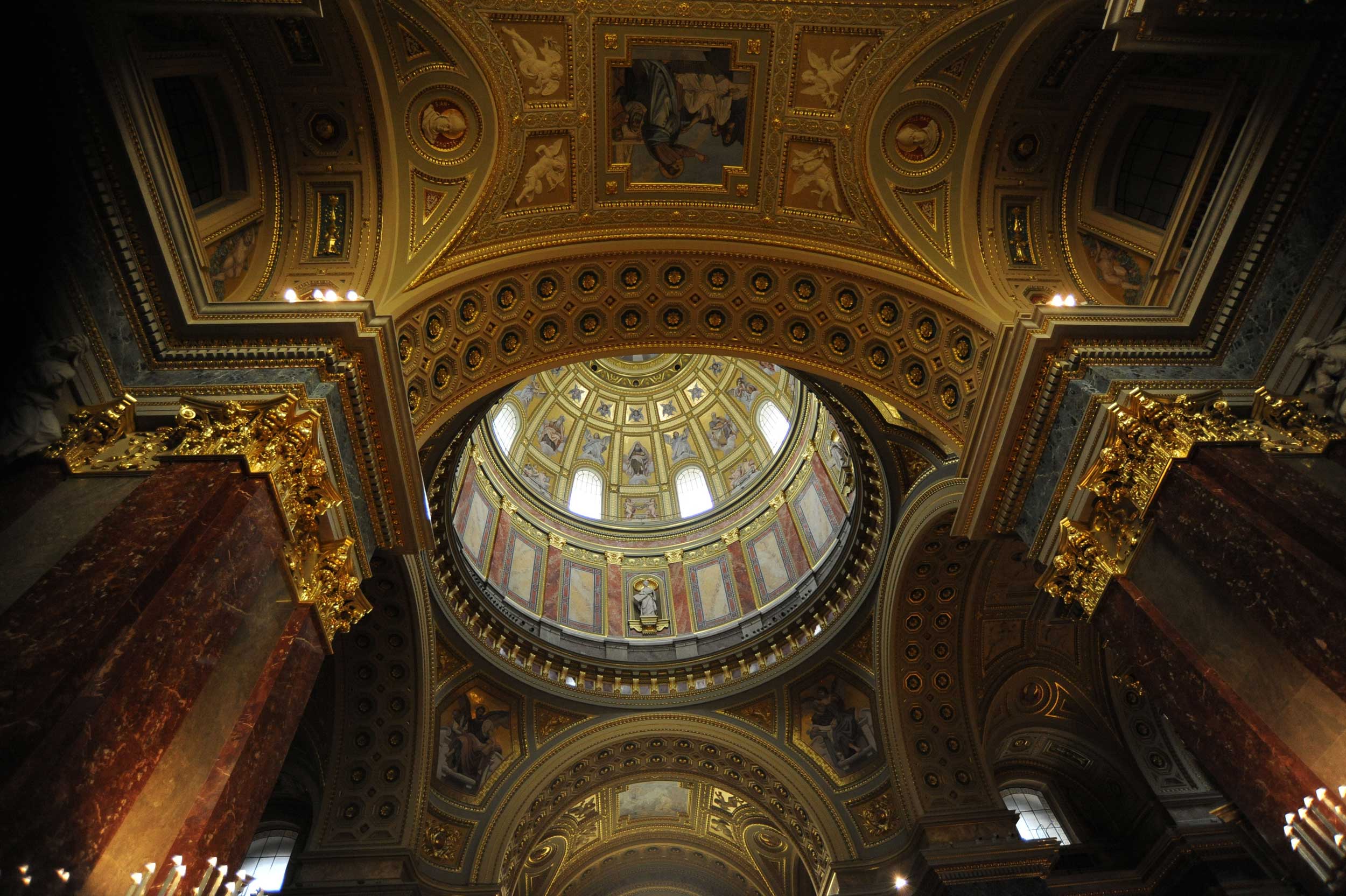 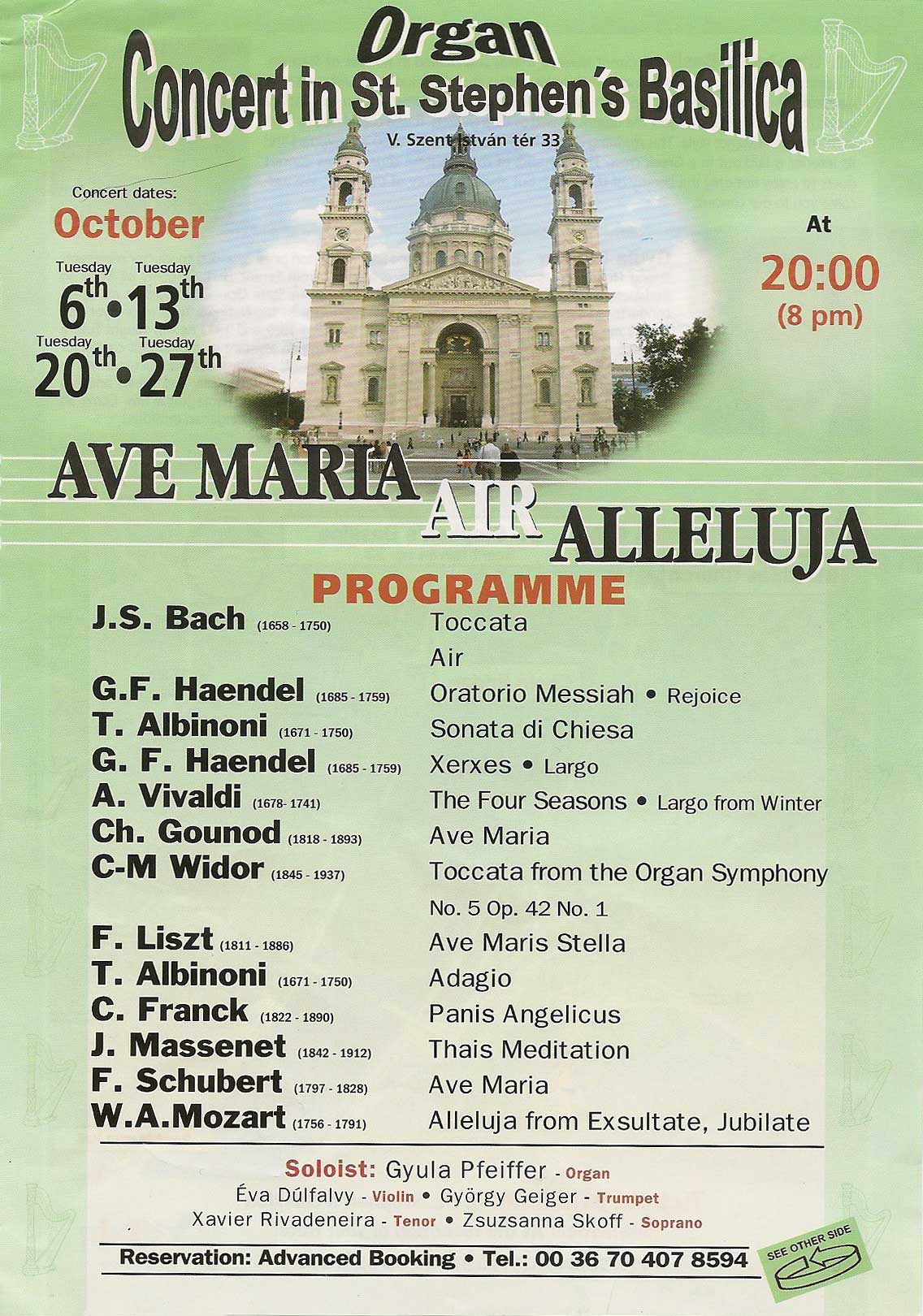 We took advantage of this opportunity. Because Faye is deaf the agent gave us an upgrade to front pew, well ahead of the crowd in chairs. 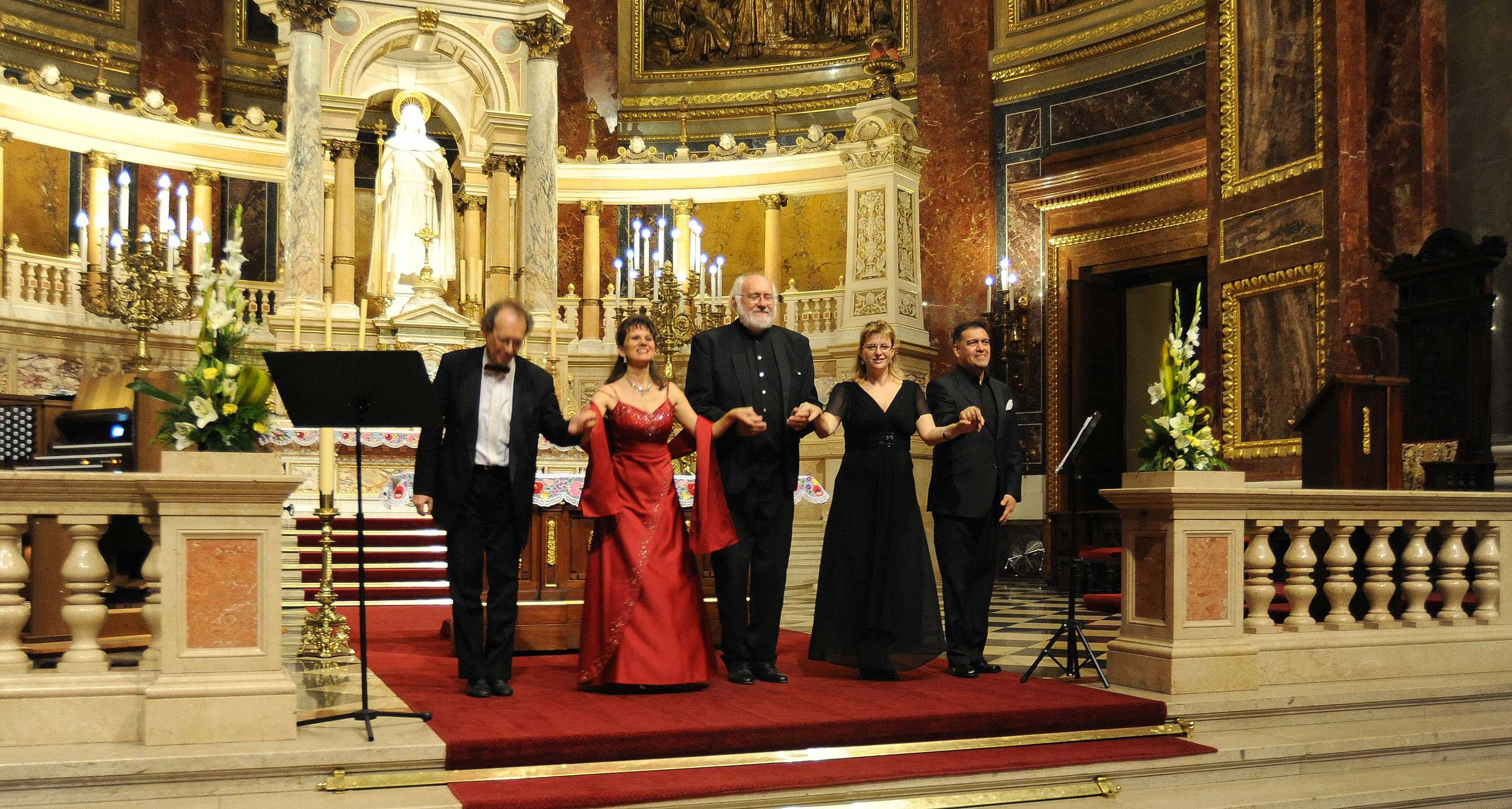 And the show was simply spectacular. A giant organ along with these top professional musicians.

Beyond the Cathederal we soon come to Liberty Square

This fountain in the southern side of Liberty Square is very interesting. The statue and columns on the far side of the fountain are a monument honoring the victims of the German occupation during WW II. 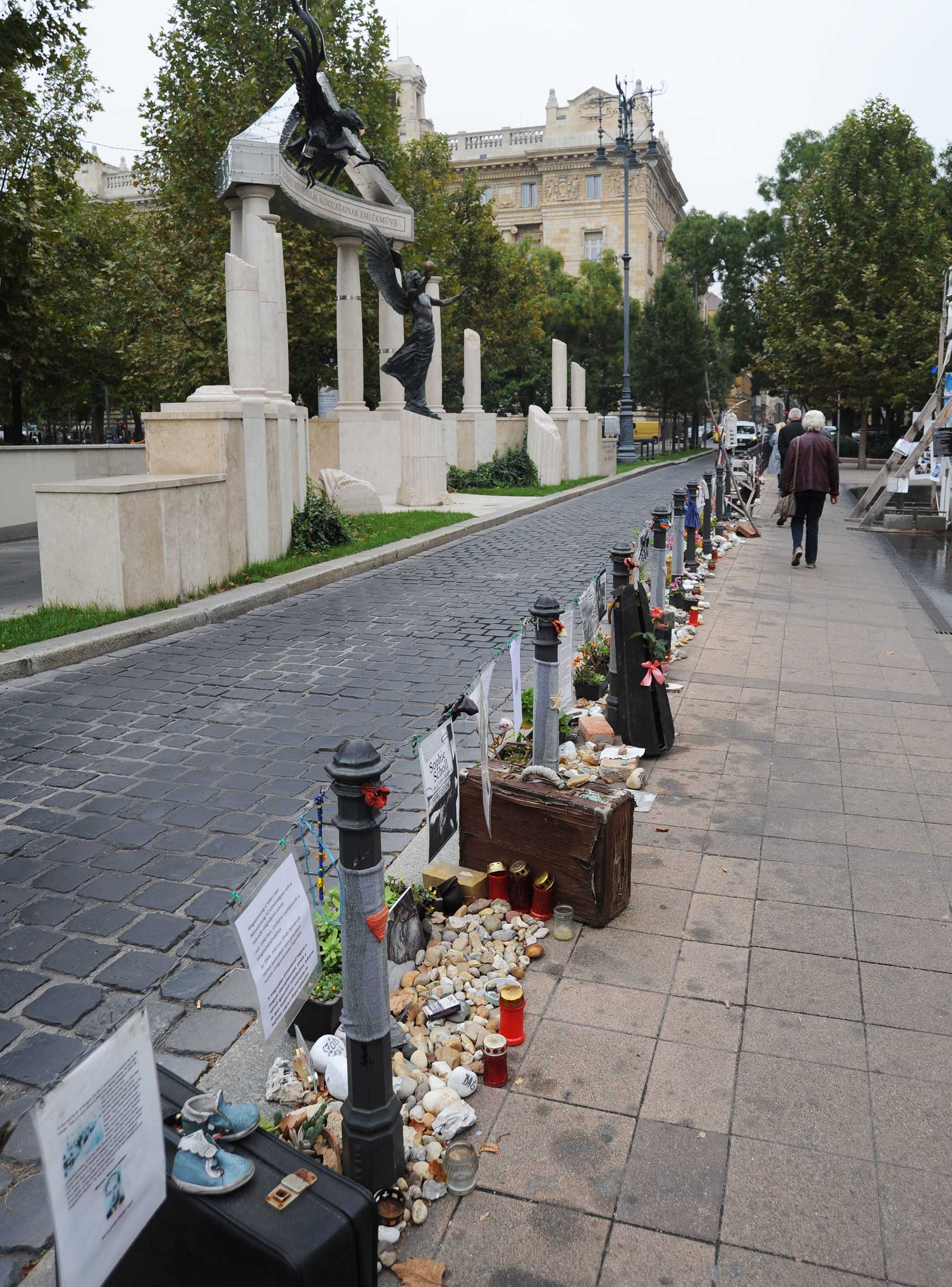 This monument has been the source of much anger. Read the letter displayed in the second photo below to get the full story. Hungarians have placed very poignant reminders of the forced removal of their citizens by the Nazis. 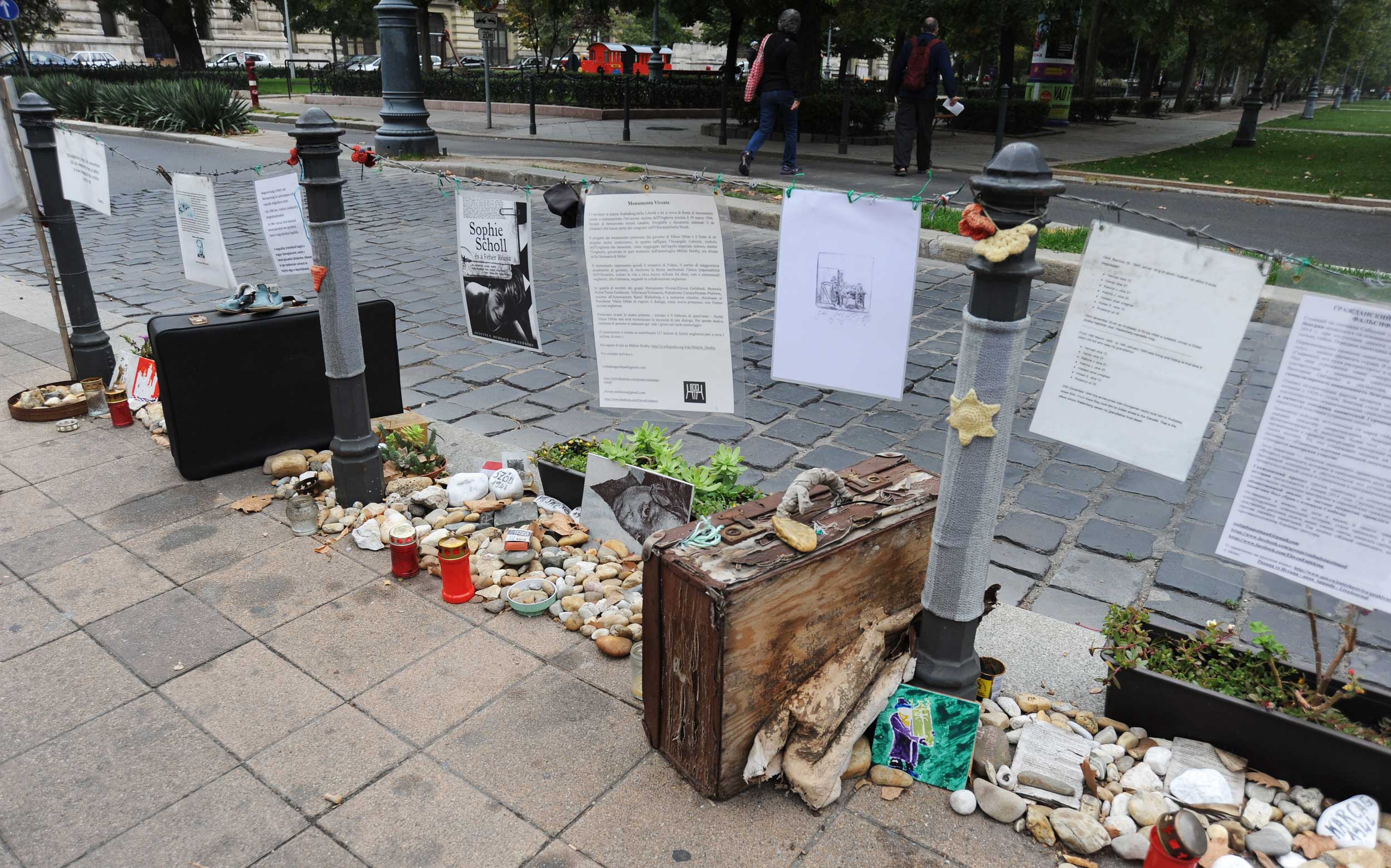 Clearly the war has not been forgotten. 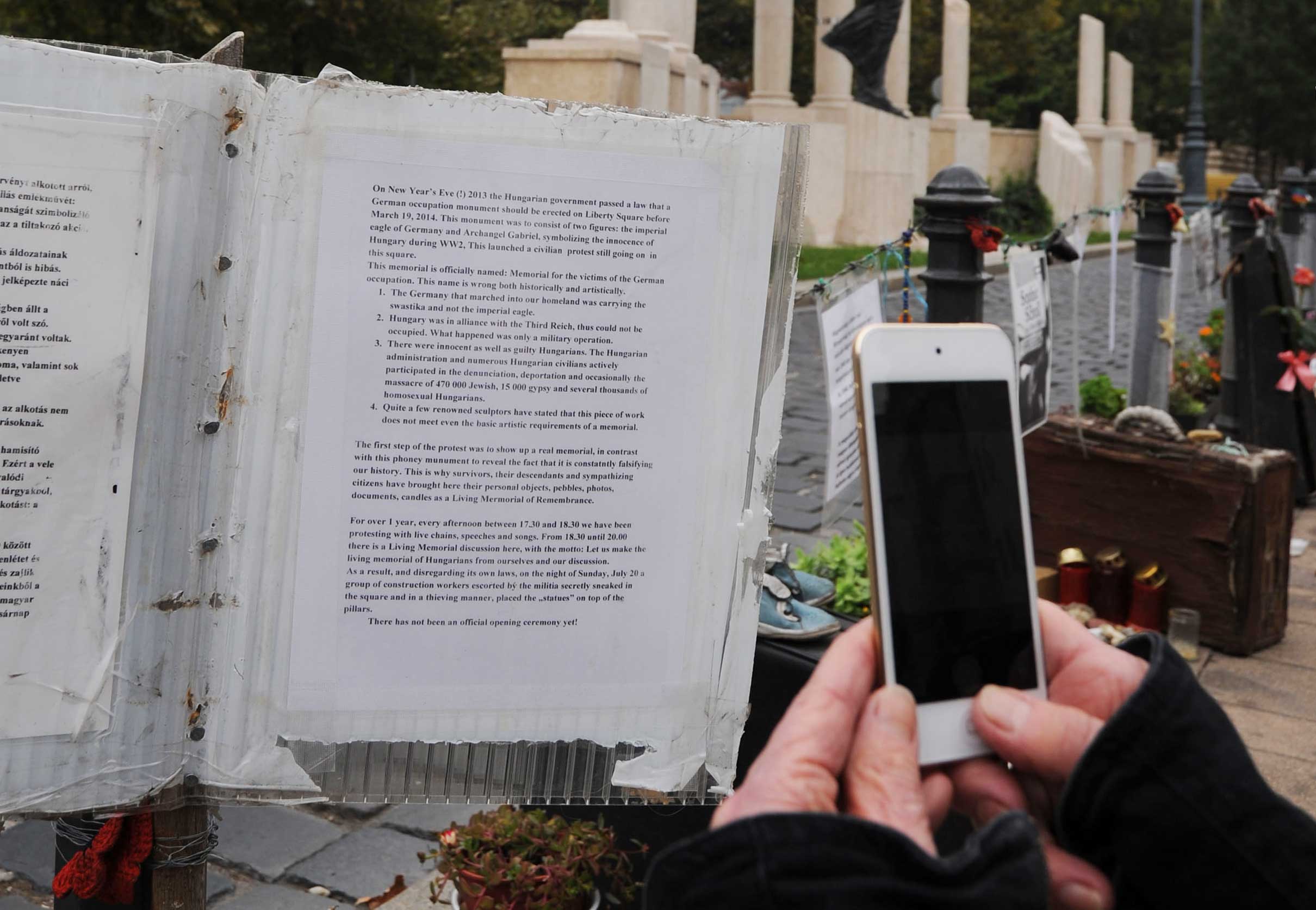 And much of the anger is directed at the Hungarian government effort to gloss over the issue. Read and weep...

The north end of Liberty Square contains this monument built by the Soviets to honor the soldiers of the Red Army who died in the liberation of Budapest from the Germans. The U.S. Embassy is located here, and several beautiful examples of Art Nouveau architecture. 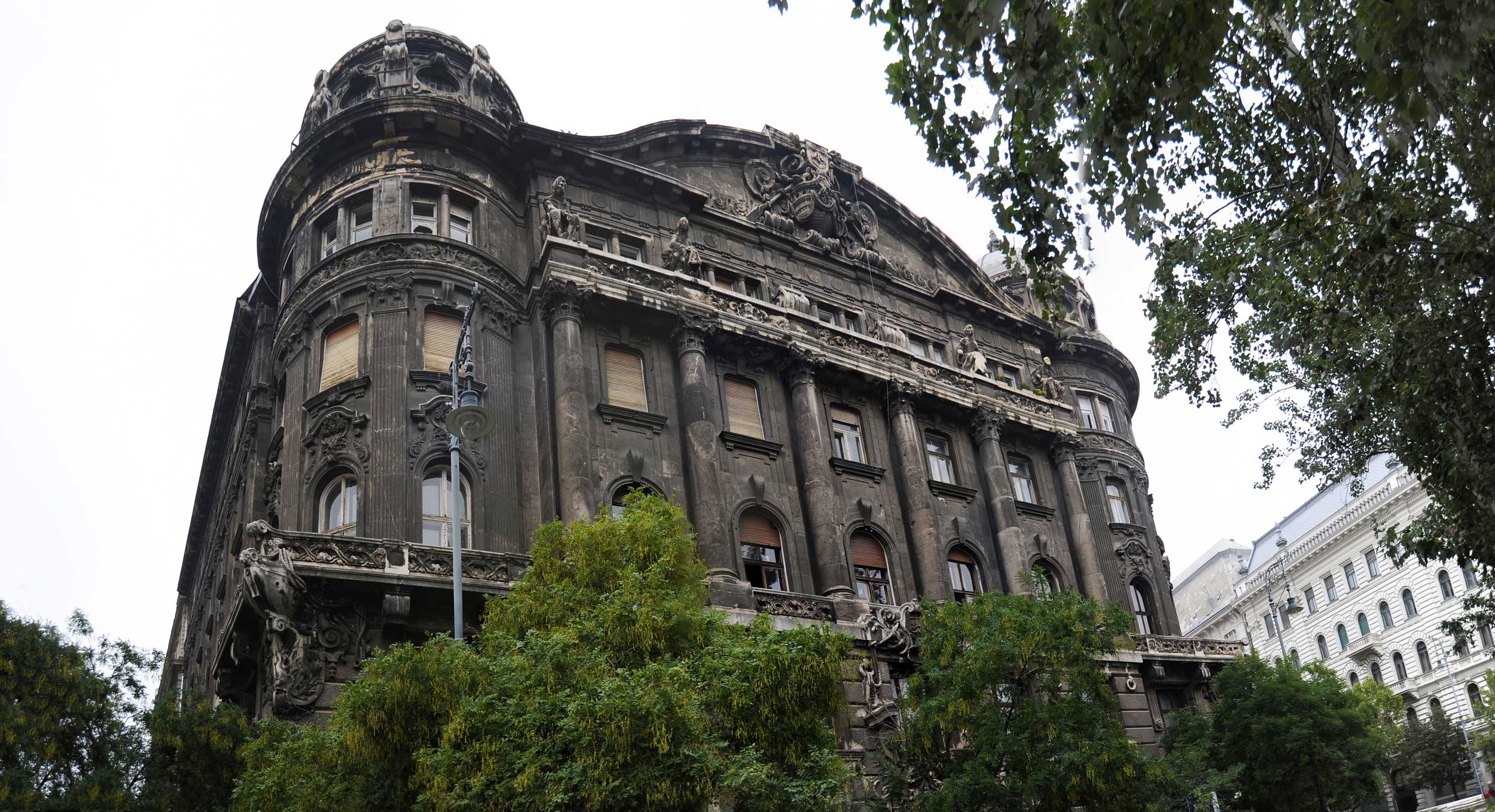 A good example of Art Nouveau. This building left in its dirty look for the use in movie making of films about the past. 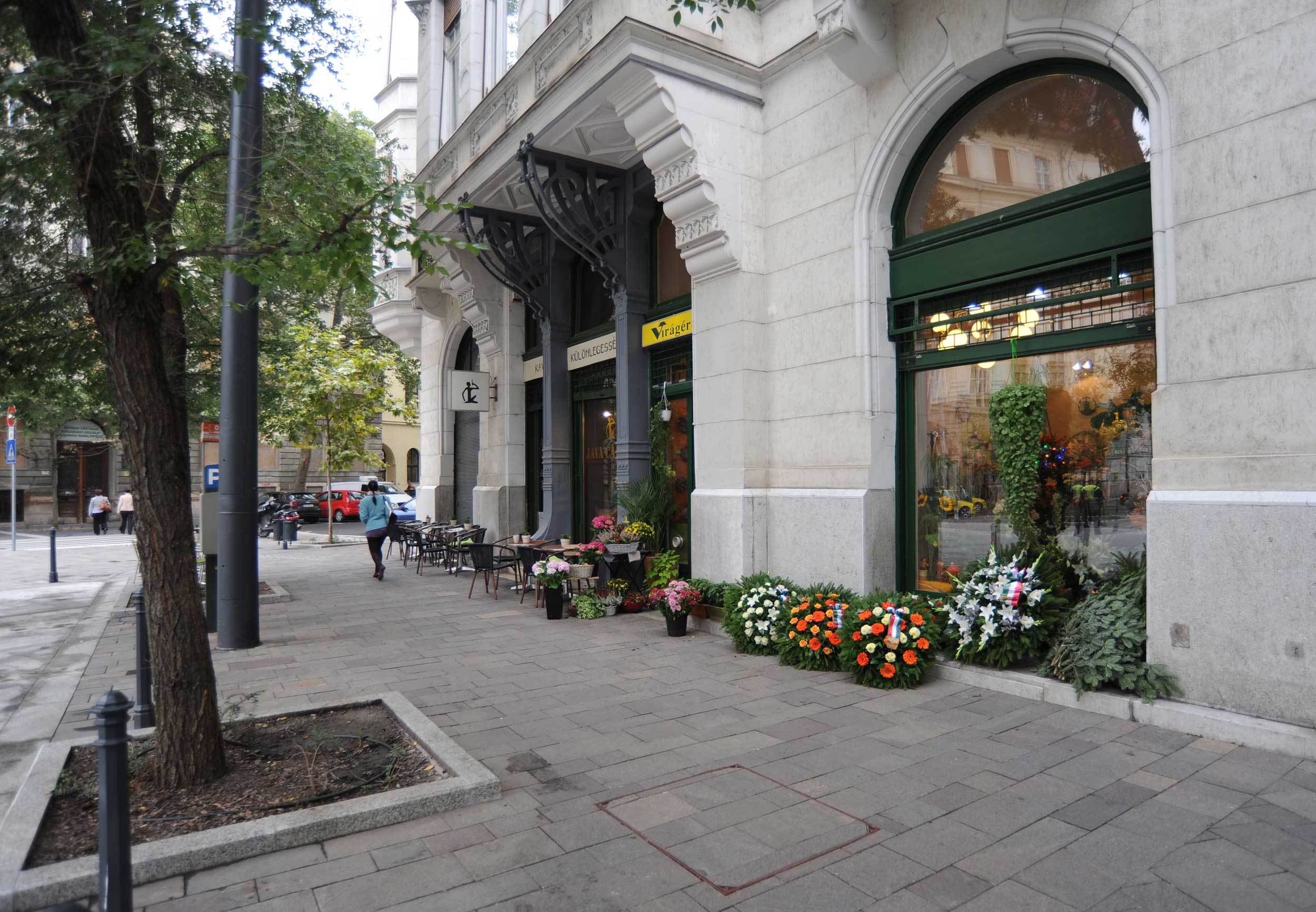 Heading northeast from Liberty Square the neighborhoods become more wealthy and maintained. Here is a coffee shop and flower shop. 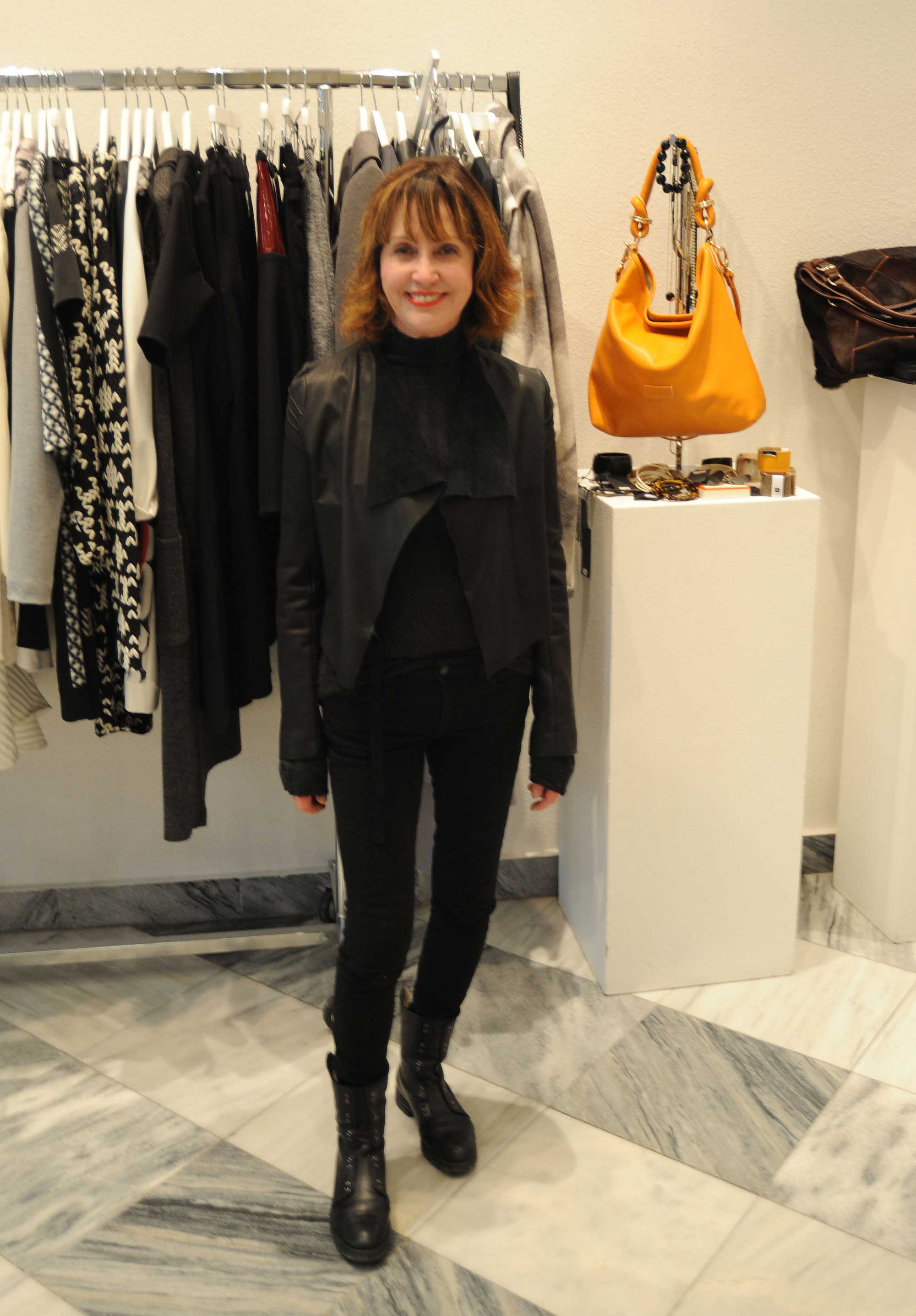 Next door is a women's botique fashon store. Everything custom made. Faye really liked this jacket in black leather. But, the price of $1700 left us breathless. Clearly there are some very wealthy folks in this town. 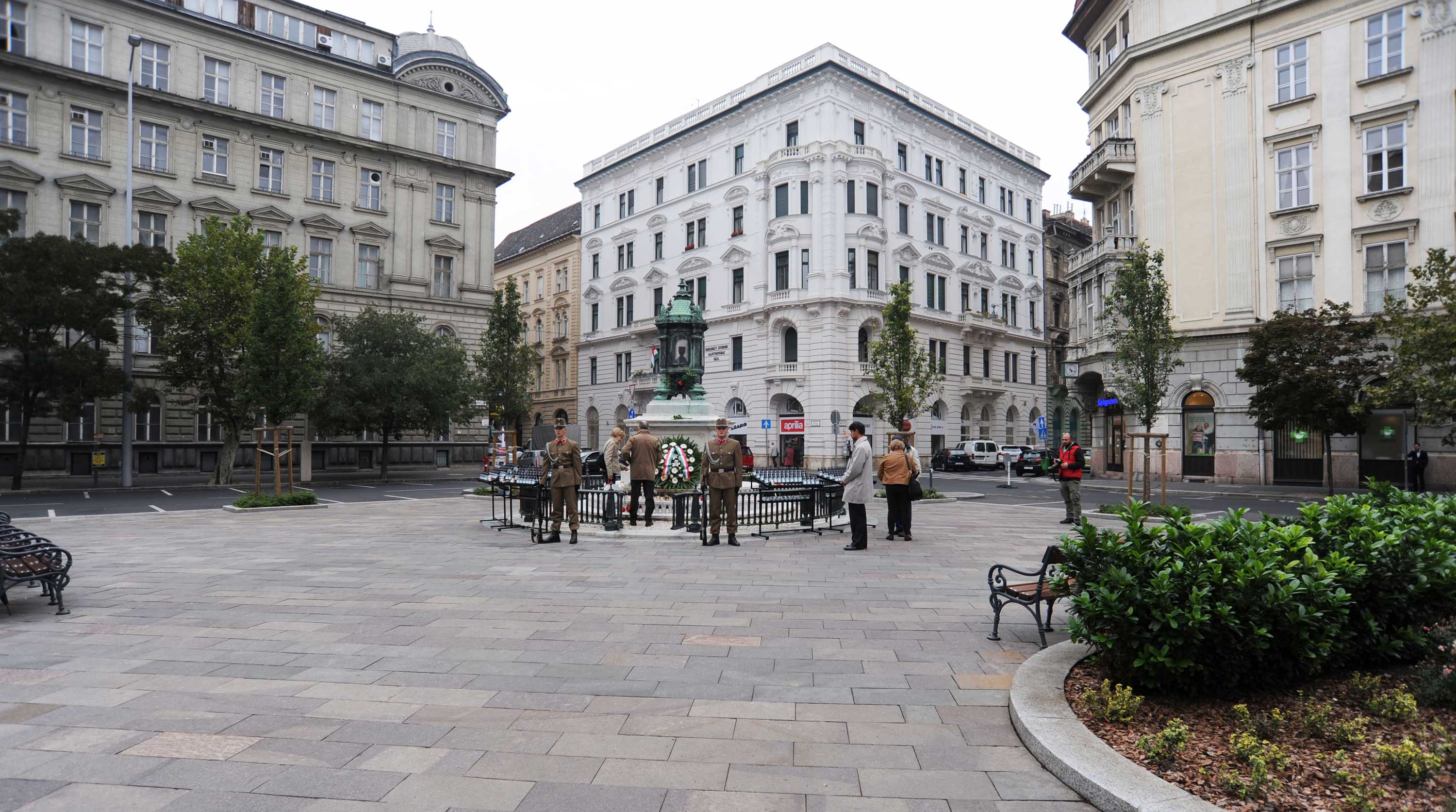 Another block northeast brings us to this Eternal Flame monument. 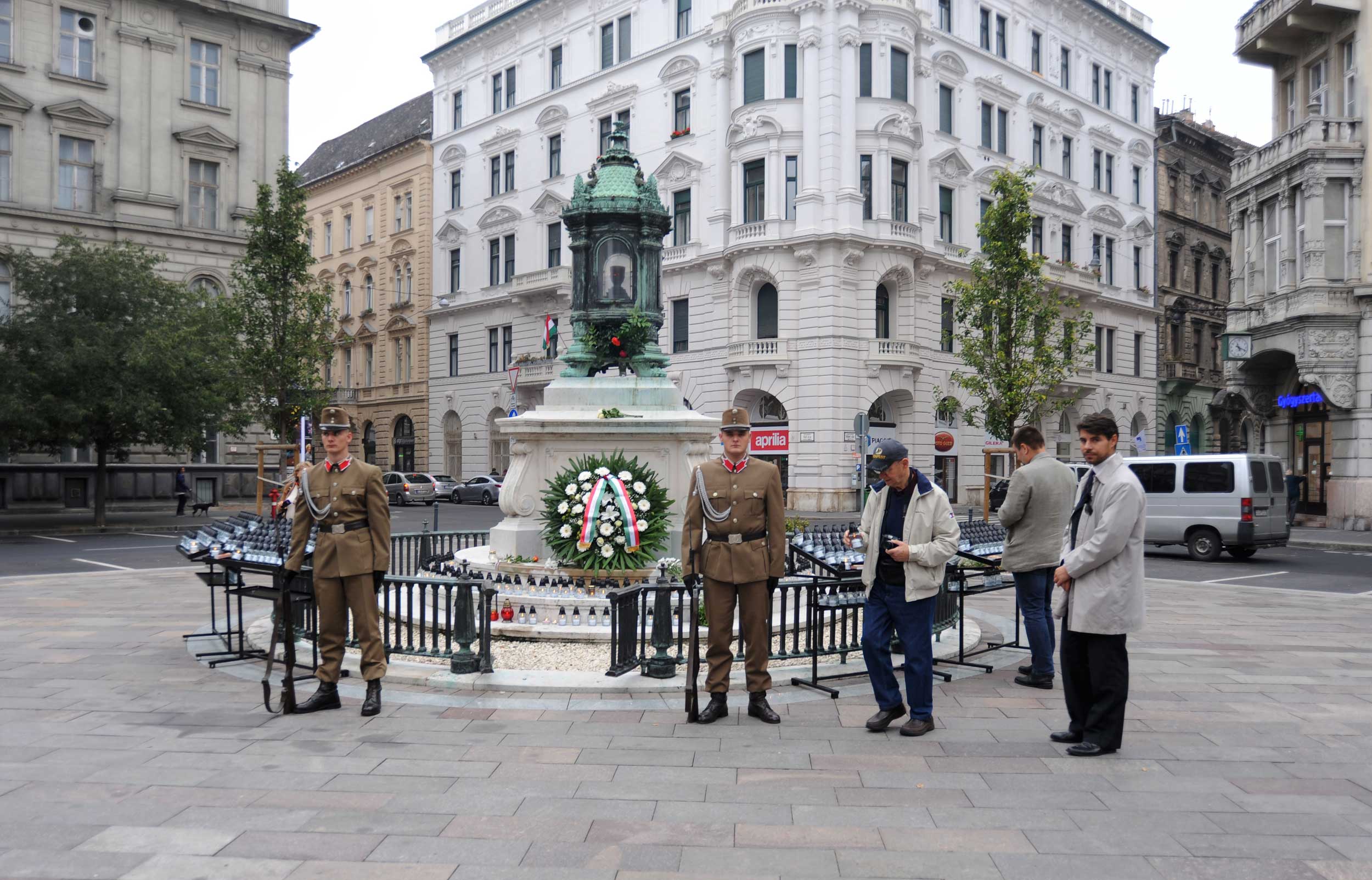 Guarded by two soldiers who remained absolutely still. I thought they were statues at first. 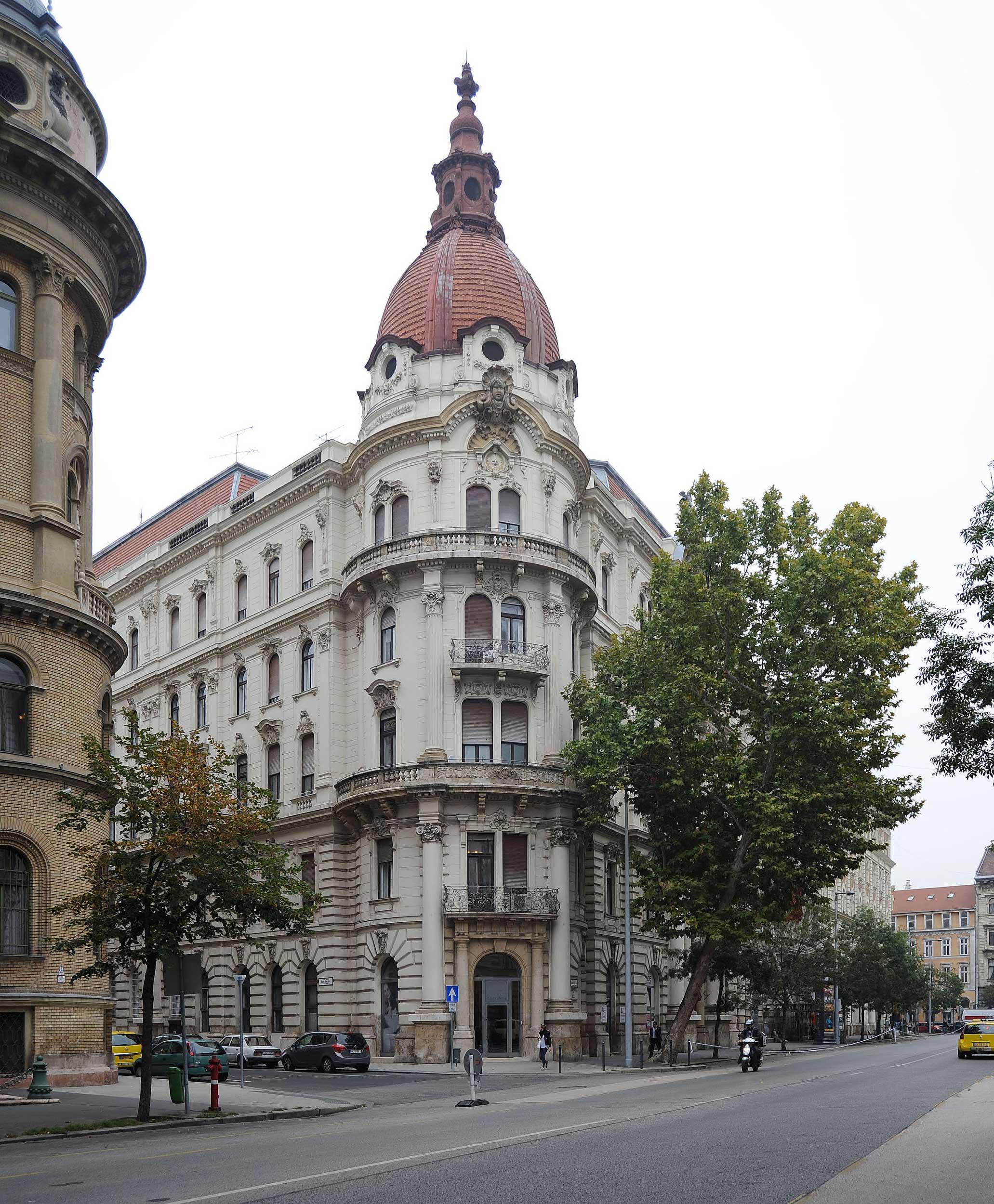 Continuing northeast brings us to some beautiful old buildings. 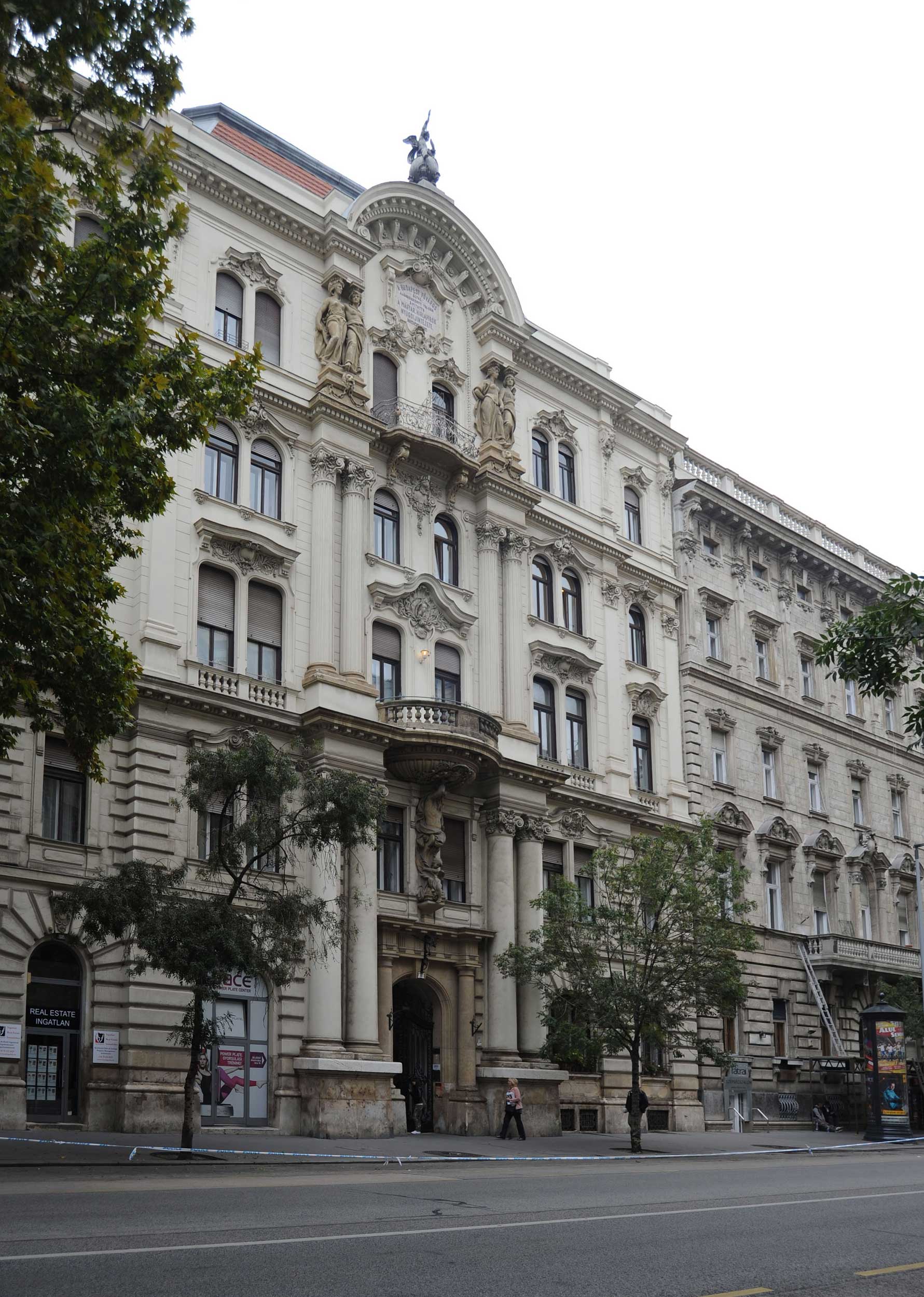 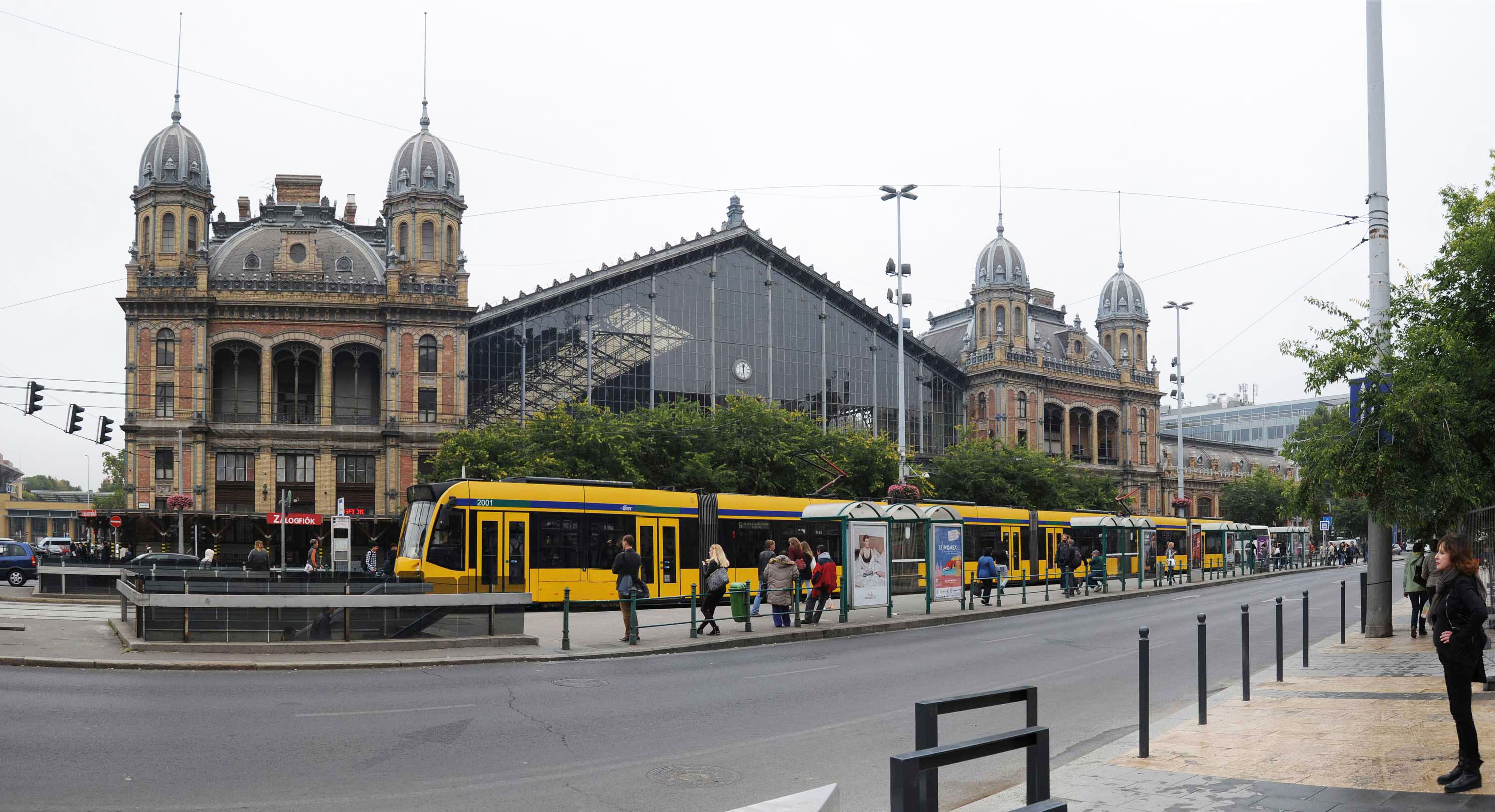 And, eventually to the Nyugati West Railroad Station. Another beautiful design. This one built in 1877 by the Eiffel Company of France. Using a cast iron frame.

Inside is not so beautiful. Needs maintenance badly. The station is also a metro station. Since we were tired of walking we decided to give the metro a try. It is located well below ground under the train station. 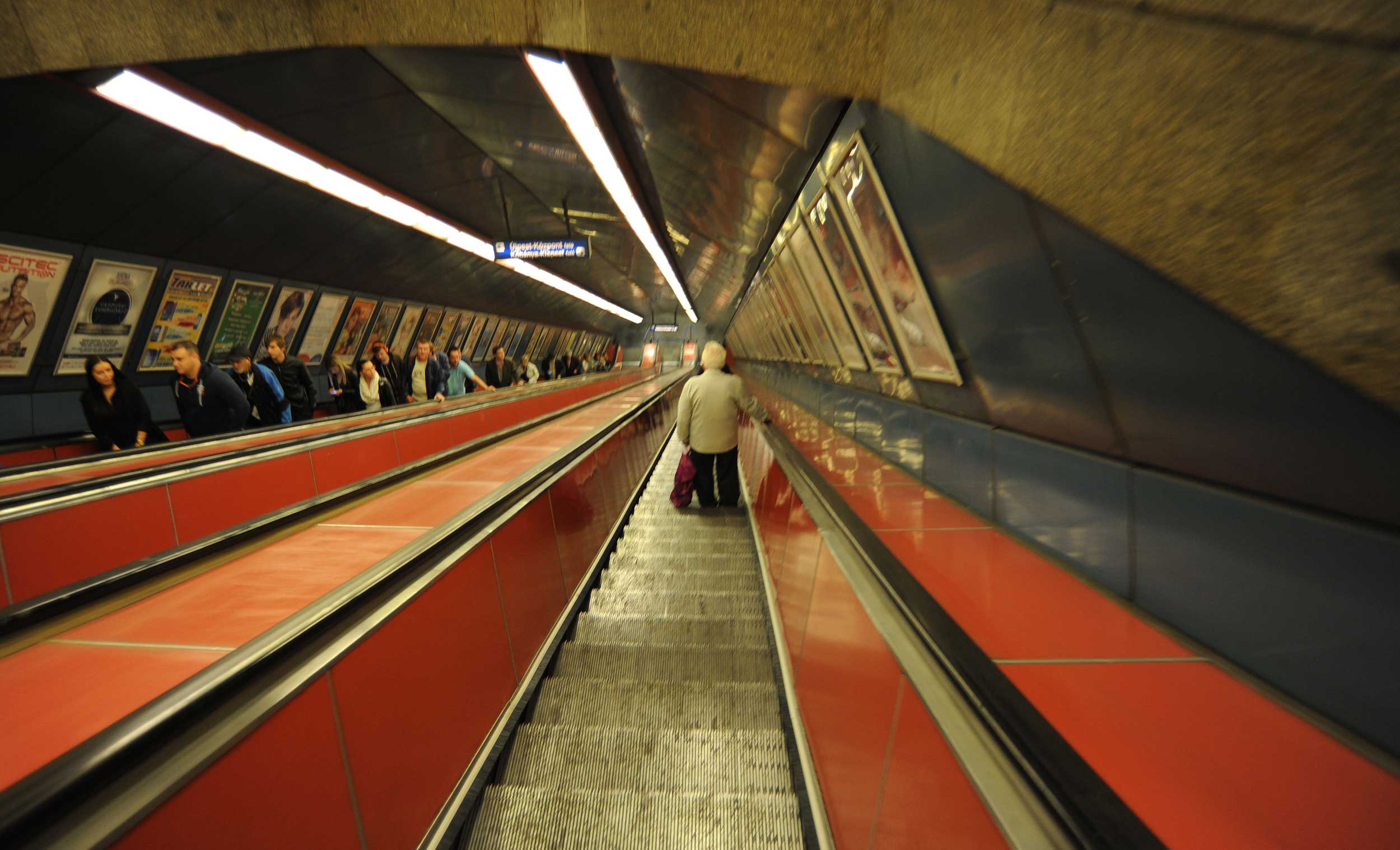 A long escalater ride to get to the metro level.

There is a mall of sorts at the metro level. Dark and run down. Looks 3rd world. 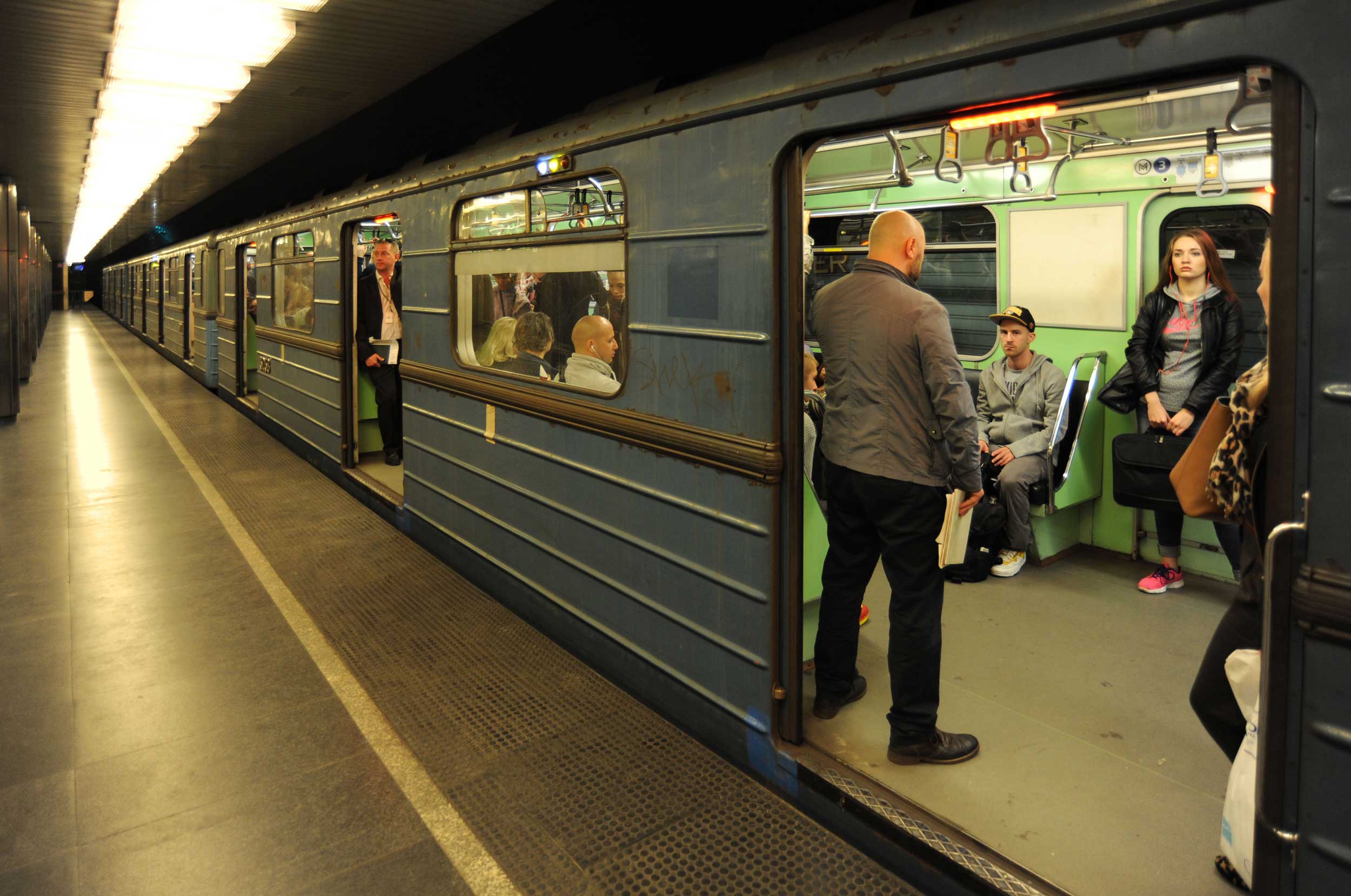 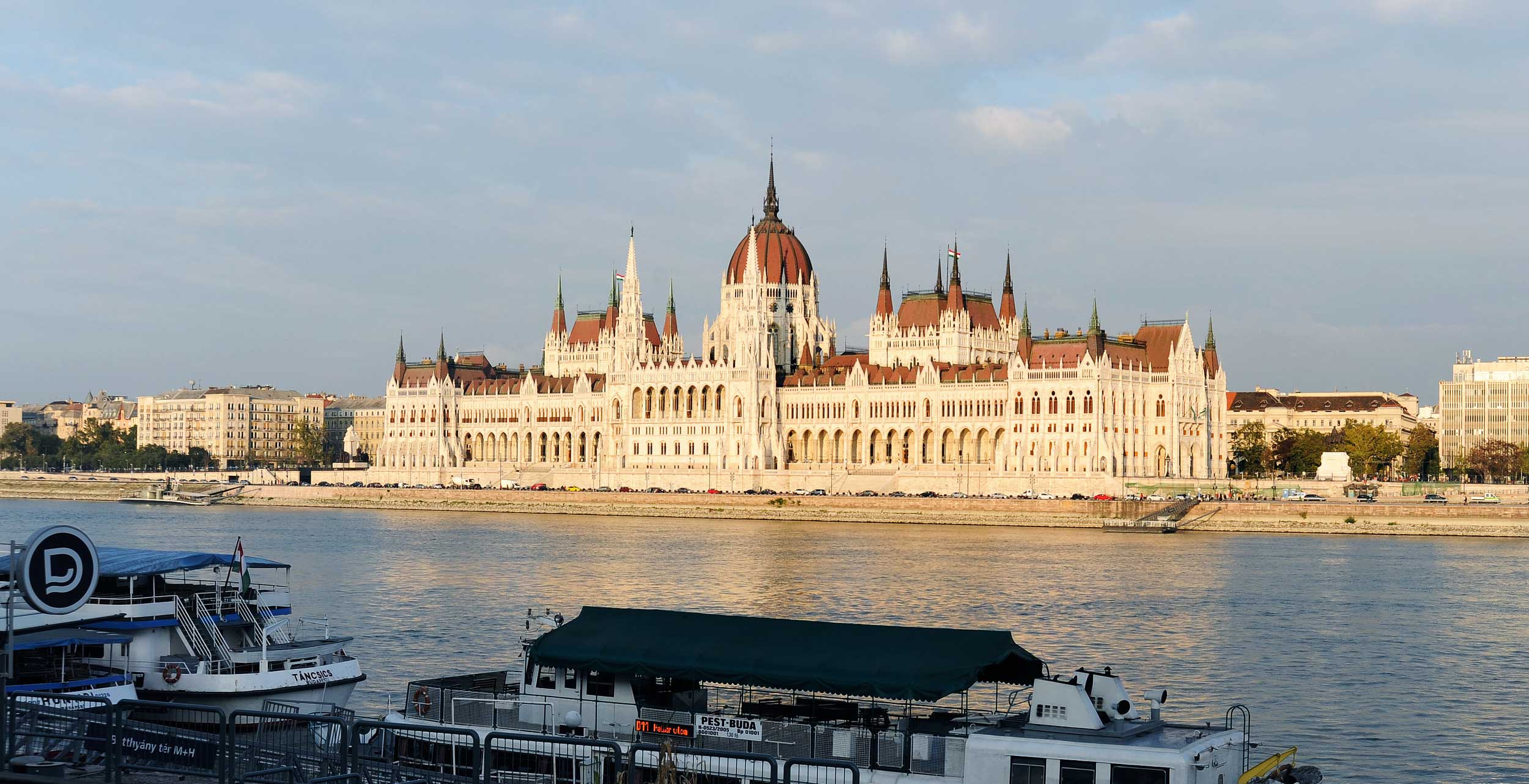 This gothic revival style building was completed in 1904. It is famous as the most photographed building in Budapest. Nearly every tourist brochure shows this as a symbol of Budapest. Most persons see it as in this photo, from the river side. Yet the main entrance is on the other side. It is a giant building (879 feet by 404 feet) and has 10 interior courtyards. The dome reaches 315 feet tall. 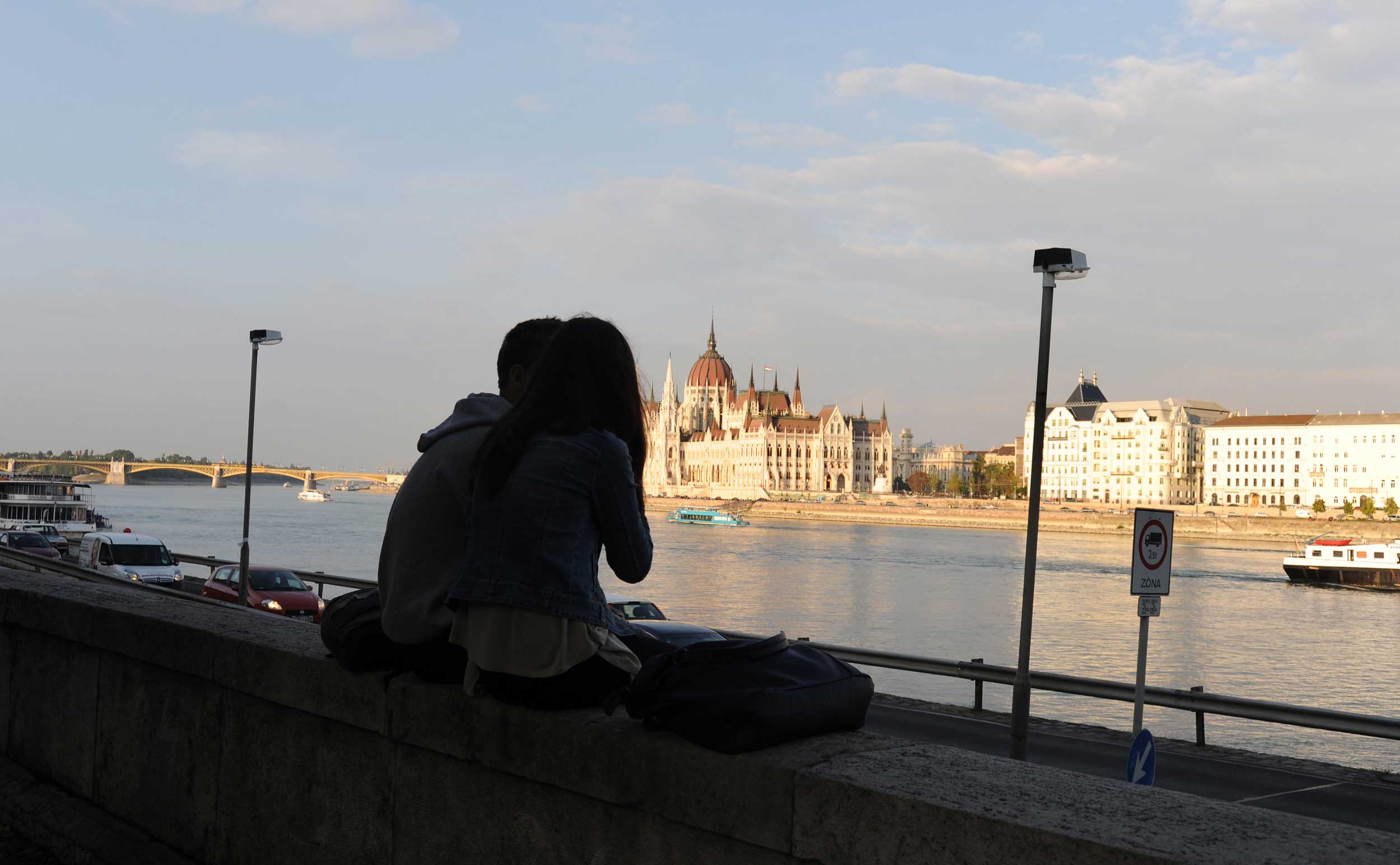 Its fun to see different ways it might be seen by others. Here lovers. 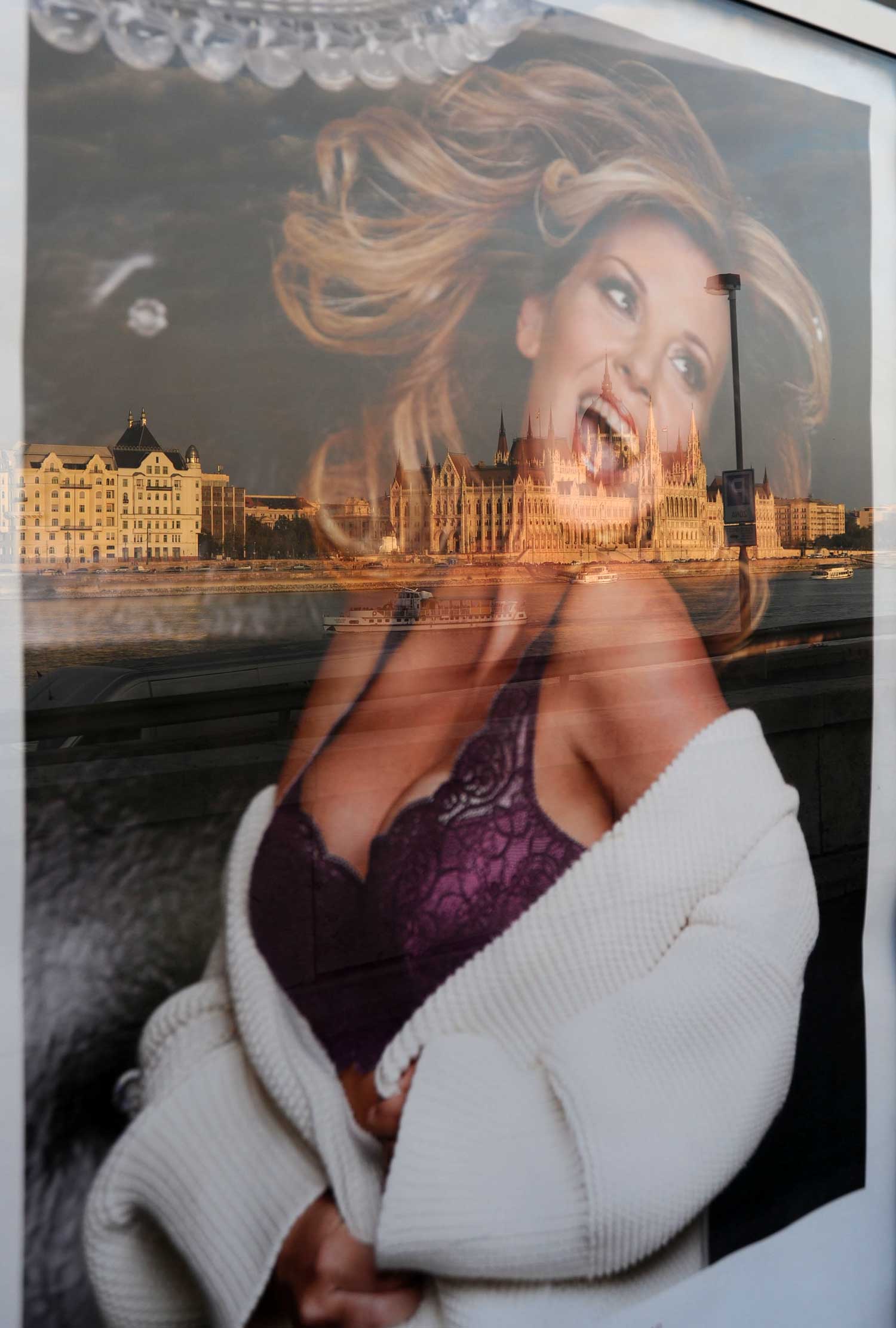 This is the inland side with promenent main entrance. Beautifully lit at night.

That's it for the Pest side. Now, let's head across the chain bridge to see the Buda side.

On to Buda Sights