The Story in Pictures 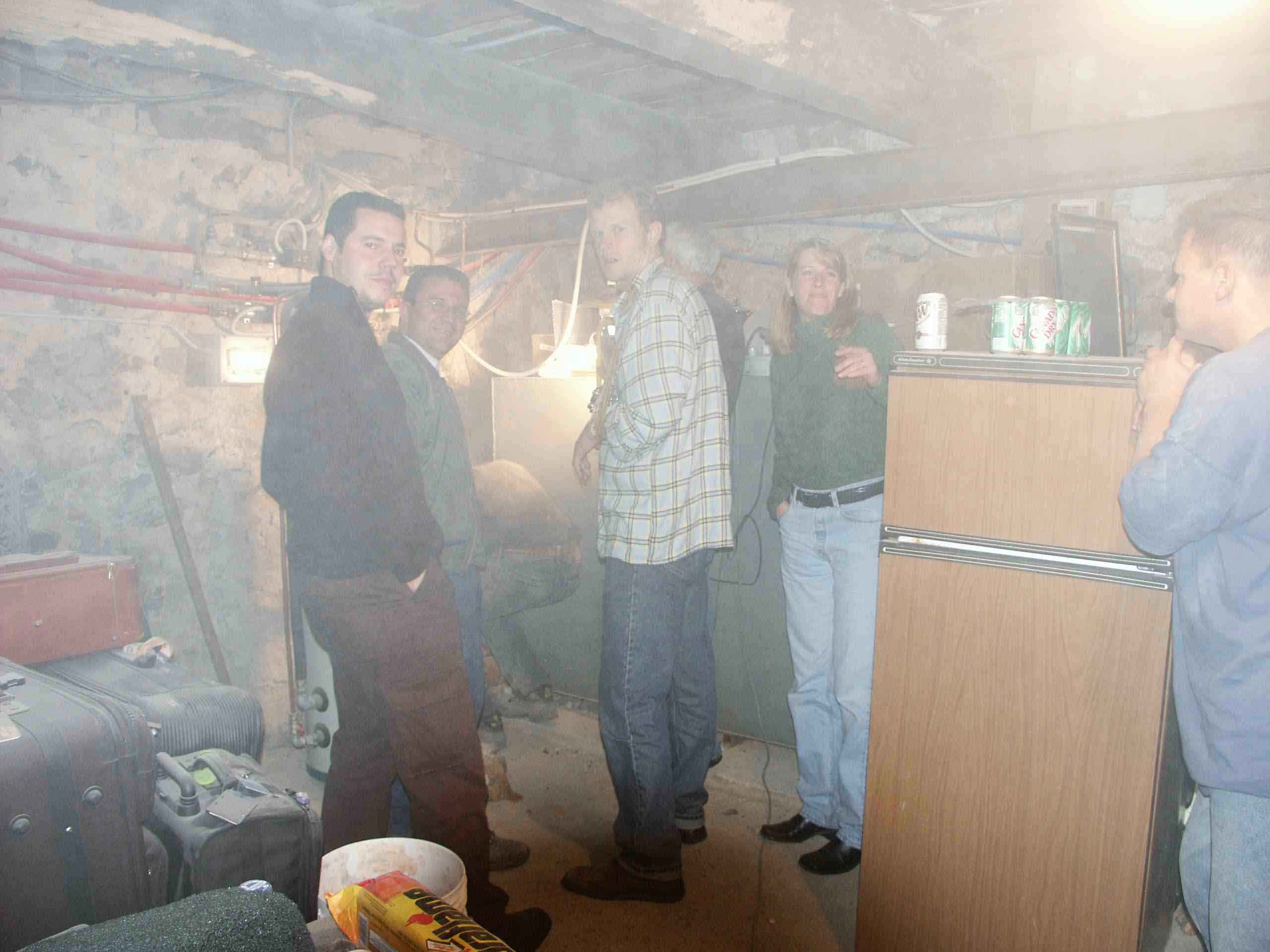 “Dust from jackhammering clouds the scene”

To: 'Dootscram@aol.com' Subject: WOW - What a week!

Thanks for your toasts and good thoughts for us. This has been the fastest passing week of my life. Seems like I just arrived in Italy, and its over already. But, with some extraordinary memories...     Thanksgiving lunch was all it could be. Three hours of endless great food, red and white wines, and the whole family together for the first time since Edith's wedding. Plus some dear friends from the neighborhood. After lunch/dinner we headed up to the house and the daunting task of finding the hidden room.

Like you guys, we had all selected what we thought we would find in the room, if it existed. Faye thought gold and jewels, Edith - a male body, Karl - dirt, Abbi - a dead female neighbor, Steve (Florence) - old clothes and contraband, Florella - furniture, Katie (friend) - building materials, Jim (friend) - religious goodies, me - two dead teenage daughters (didn't go over well, so changed to gold bars), Louis (electrician) - weapons, Giancarlo (our general contractor) - general treasure like jewels and gold. So we had the full spectrum. Our mason, Danelle, began jackhammering at about 4:00 pm. After four long hours of backbreaking work we had a hole about 18 inches wide and 2 ft deep, with no end in sight. We decided to drink wine and rethink our plan. After much wine, the new plan - reconvene on Saturday morning and try to drill into the hole to see if there is a void somewhere. If not, forget it.     Friday the women went shopping all day and we guys toured a marble cutting and sculpting factory, a fabulous display center that shows what can be done in restoring and outfitting classic Italian homes, and finally a yacht maker specializing in 100-150 foot sailing palaces. Incredible. Fun. Pizza and wine dinner back at the house.

On Saturday, Louis, our electrician (and adopted son of our family, a super guy) arrived at the house about 10:00 am for the drill test. Using a 85 cm bit (about 30 inches) he did a series of test holes through the rock and concrete. Lo and behold, he found a void on the second test hole. About 2 more feet of wall to the void (a total of four feet of cemented rock wall -gasp). We immediately went down to a town about 10 miles away to rent a mahungus jack hammer. We started hammering about 12 noon. With three of us taking turns, we hammered for four straight hours, finally breaking a 6 inch hole through to a dark void. We could see into the void using a strong flashlight. Now it begins to get a little weird. Peeking through the hole, I could see some old wiring and light bulbs strung along one wall, and a leather briefcase on the floor about three feet in front of our hole. The room looked about 6 ft wide and about 20 feet deep with an arched ceiling about 5 ft above the floor. There was a side corridor to the left about 10 ft into the first room. There was a pair of boots on the floor and a metal drum and some pails at the far end.

This situation really changed our thinking. Instead of the 150 year old hidden room, we were looking at something that looked about 1945 vintage. Because the Germans used our house as their headquarters in Benabbio during the war, we immediately shifted gears to a scenario of German contraband hidden for future recovery by someone who never made it back. The Germans had a practice of setting booby traps in everything they left behind when they retreated. So the briefcase took on a totally new perspective. We had to be very careful.

Another hour of hard work gave us a hole big enough to squeeze through. I wiggled in with flashlight in hand. Immediately inside the opening was a suitcase that we hadn't been able to see because of the angle down. We had knocked several large rocks onto it, but fortunately nothing blew up. The briefcase was rotted to the degree that there was a one inch wide opening in the top. By carefully inserting the flashlight, I was able to see a hairbrush, comb and a man's tie. The tie was grey with narrow black angled stripes. A German military tie? We used  a metal detector to probe the suitcase, and got a strong ping right in the middle. Probably a hand grenade? I left the suitcase undisturbed and stepped over the briefcase to look into the corridor to the left. The corridor was about 12 feet deep and 5 ft wide. On the floor was a 18 inch tall brick-supported platform of 2 inch thick planks covering the full width and running the full length of the corridor to the wall at the end. On the platform was a human skeleton and a rifle. There was a bricked up corridor to the right of the skeleton, running parallel to the main corridor. A million questions ran through our minds. Why would the Germans leave a soldier behind like this, and so well protected behind a four foot wall? Was this guy guarding some treasure? Was something behind the bricked up corridor?

Wanting to clear out any possible danger, I tied a wire with a 20 ft lead around the suitcase and exited back through the hole in the wall. With everyone safely out of the way, we pulled hard on the wire to shake the suitcase and trigger any possible explosive. Nothing happened. So, back into the void to investigate. The suitcase had fallen apart from the shaking we gave it. Inside I could see some good shoes, a set of dentures (ugh!), and a small bottle with a cork in it. There was a note in the bottle. Back out in the basement we pulled the cork and with a long nosed pliers fished out the note. It was two pages hand written in green ink. Dated April 1958. Entitled "Declaratione di Suicide". Rats! This guy killed himself.

The note was beautifully written. He had planned to go to America, but ill health prevented his travel (he was only 57 years old). Because of his health problem he did not want to be a burden on his children, so he decided to disappear in this manner. He sealed himself into this room behind the basement and had a stone mason friend complete the external sealing of the opening so that no one could find it. He said that he hoped that no one would ever find his remains, but if someone did, to turn them over to the authorities and notify his remaining family. He was worried that his accomplice (the mason) might be identified, so gave no details of the mason. He told his children that he loved them, and apologized for any inconvenience he might have caused by his chosen form of demise.

We called the Caribinari (Italian military police) and exited the basement to drink wine and wait. The first police arrived in about 20 minutes and they immediately called for ambulance, mortician and the regional head of police. All these arrived about 7:00 pm. Within minutes we had nearly the entire village population gathered at our house. The village priest arrived full of good will. It turns out that half of the village was old enough to remember the deceased and his sudden disappearance. Some had even suspected that he was buried beneath the house ( no secrets in a small town). But finally the mystery was solved. We sent Edith and Karl down the hill for 15 pizzas, and hosted a party of family, neighbors and workers. The police politely declined wine, but stayed to chat. The police borrowed our digital camera chip to down load the photos we had taken in the hidden room, and asked three of us (Faye Steve and me) to report to the police station at 11:00am the next morning to give our statements. The party lasted late.

The next morning we reported as required. See photos. It turns out that the police had located a granddaughter of the deceased and she had come to the station earlier. Our statements were made and we were "released" in time for a great luncheon in Bagni di Lucca.

Postscript:     1) Somehow the press had learned of the events at our house. Front page articles appeared in two national Italian newspapers with the story (elaborated to include the story that the deceased had wanted to go to America to join his long time mistress) and photos of the house. Then somehow the story caught the imagination of the world. Two leading Italian newspapers did full interviews with Faye and have produced full page stories with photos. The London Times and Guardian have run stories here in the UK. CNN has interviewed Giancarlo and run a story on Italian TV. Reuters has interviewed Faye. Today's newspapers in Italy have run follow-up stories, and all the newsstands in Italy have a picture of Faye in front of our house on their daily advertisement poster displayed in their window on taped to the outside wall of the news stand! We have created a monster.

2) After lunch on Sunday we went back to the house and tried to jackhammer through the bricked-up corridor that was to the right of the skeleton. Had to give up after about 18 inches and two hours of work. The brick is really hard, and poor ventilation makes breathing hard due to dust. We have a new plan. Reconvene on the 21st and try to drill through the brick barrier to see what might be behind. Then break through with a jackhammer if possible. We know that there is some sort of room behind the bricked barrier because we could see the tops of some barrel vaults typically used as roofs when we replaced the floors in the stairwell area of the house. Still a chance for those gold bars...   Well, that is the story of another Thanksgiving weekend at the Beubys'. I will send some photos when we get the photo chip back from the Caribinari. Thinking about making the corridors/rooms a wine cellar...   Love to you all.   Steve and all

The Story in Pictures